Does Dark Energy Vary with Time?

Einstein introduced the concept of dark energy 100 years ago.

In this model, Lambda is shorthand for the dark energy in the universe. It was introduced as the greek letter Λ into the equations of general relativity, by Albert Einstein, as an unvarying cosmological constant.

Measurements of Λ indicate that dark energy accounts for about 70% of the total energy content of the universe. The remainder is found in dark matter and ordinary matter, and about 5/6 of that is in the form of dark matter.

Alternative models of gravity, with extra gravity in very low acceleration environments, may replace apparent dark matter with this extra gravity, perhaps due to interaction between dark energy and ordinary matter.

The key point about dark energy is that while it has a positive energy, it rather strangely has a negative pressure. In the tensor equations of general relativity the pressure terms act as a negative gravity, driving an accelerated expansion of the universe.

In fact our universe is headed toward a state of doubling in scale in each dimension every 11 or 12 billion years. In the next trillion years we are looking at 80 or 90 such repeated doublings.

That assumes that dark energy is constant per volume over time, with a value equivalent to two proton – antiproton pair annihilations per cubic meter (4 GeV / m³).

The Dark Energy Survey results seem to say so. This experiment looked at 26 million galaxies for the clustering patterns, and also gravitational lensing (Einstein taught us that mass bends light paths).

They determined the parameter w for dark energy and found it to be consistent with -1.0 as expected for the cosmological constant model of unvarying dark energy. See this blog for details:

The pressure – energy density relation is:

The parameter w elucidates the relation between the energy density given by ρ and the pressure P. This is called the equation of state. Matter and radiation have w >= 0. In order to have dark energy with a negative pressure dominating, then w should be < -1/3. And w = -1 gives us the cosmological constant form. 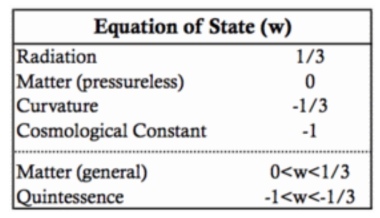 Cosmologists seek to determine w, and whether it varies over time scales of billions of years.

The Concordance model is not very well tested at high redshifts with z > 1 (corresponding to epochs of the universe less than half the current age) other than with the cosmic microwave background data. Recently two Italian researchers, Risaliti and Lusso have examined datasets of high-redshift quasars to investigate whether the Concordance model fits.

Typically supernovae are employed for the redshift-distance relation, and cosmological models are tested against the observed relationship, known as the Hubble diagram. The authors use X-ray and ultraviolet fluxes of quasars to extend the diagram to high redshifts (greater distances, earlier epochs), and calibrate observed quasar luminosities with the supernovae data sets.

Their analysis drew from a sample of 1600 quasars with redshifts up to 5 and including a new sample of 30 high redshift z ~ 3 quasars, observed with the European XMM-Newton satellite.

They claim a 4 standard deviation variance for z > 2, a reasonably high significance.

Models with a varying w include quintessence models, with time-varying scalar fields. If w decreases below -1, it is known as phantom energy. Their results are suggestive of a value of w < -1, corresponding to a dark or phantom energy increasing with time.

For convenience cosmologists introduce a second parameter for possible evolution in w, writing as: 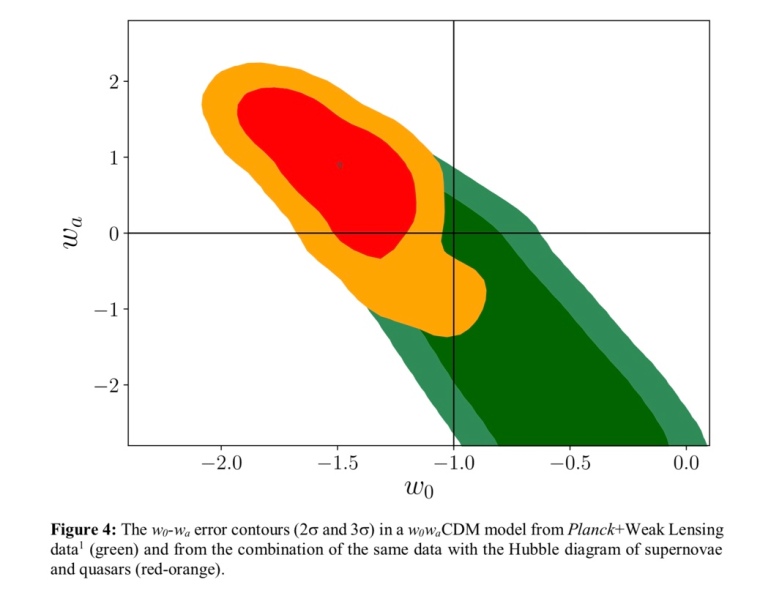 The best fit results for their analysis are with w0 = -1.4 and wa ~ 1, but these results have large errors, as shown in Figure 4 above, from their paper. Their results are within the red (2 standard deviation, or σ) and orange (3σ) contours. The outer 3σ contours almost touch the cosmological constant point that has w0 = -1 and wa = 0.

These are intriguing results that require further investigation. They are antithetical to quintessence models, and apparently in tension with a simple cosmological constant.

This entry was posted on Thursday, February 7th, 2019 at 1:13 am and tagged with cosmological constant, Dark energy, phantom energy, quintessence, vacuum energy, XMM-Newton and posted in Dark Energy, Early Universe. You can follow any responses to this entry through the RSS 2.0 feed.
« Mini Black Holes as Dark Matter?
Modified Gravity »

One response to “Does Dark Energy Vary with Time?”