Dark Matter in the Solar System: Does it Matter?

Dark matter clumps, under its own gravitational influence, into large scale structures including superclusters of galaxies, clusters and groups of galaxies, and individual galaxies and dwarf galaxies. Within our own Milky Way galaxy, the dark matter is more diffuse, more spread out, than ordinary matter. As one moves away from the center of the galaxy, and above the spiral disk that contains most of the ordinary, luminous matter, the dark matter to ordinary matter ratio increases. Ordinary matter clumps to a much greater degree since it feels electromagnetic forces, and these result in friction and shock waves that heat up the ordinary matter, but also cooling via radiative processes – emission of photons. Cold ordinary matter will clump due to mutual gravitational infall as it cools, and this is how we end up with molecular clouds (stellar nurseries), stars, and planets, moons, asteroids, and comets. In these structures, which are at much smaller distance scales, ordinary matter dominates over dark matter. Dark matter doesn’t feel electromagnetic forces, so it remains more spread out, influenced primarily by gravitational forces. 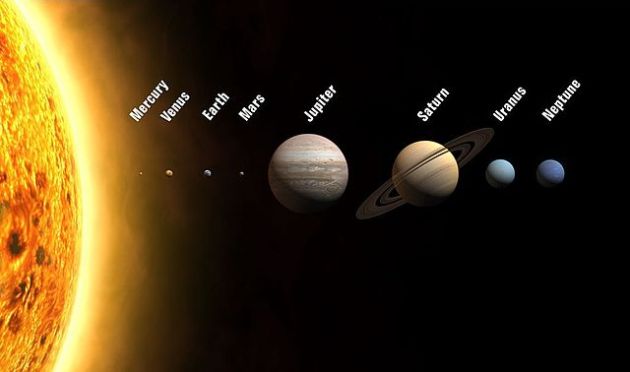 Nevertheless, one can ask the question, to what extent does dark matter influence our Solar System? For example, are the orbits of the Earth or other planets perturbed due to the gravitational effect of dark matter found in the Solar System? Surely there is some dark matter within the Solar System, assuming the most favored explanation, that it is some sort of new particle, a WIMP – weakly interacting massive particle, or perhaps an axion. This is why direct detection efforts looking for dark matter passing through Earth-bound laboratories are worthwhile.

The amount of dark matter in the galactic plane in the vicinity of the Solar neighborhood is estimated by looking at the dynamics of stars nearby and above and below the Milky Way’s disk. By looking at their velocity distribution we can measure the total mass density and subtract out the ordinary matter component. The favored value in the Solar neighborhood for the galactic background is usually taken to be 0.3 GeV/cc and equates to the equivalent of 1 proton per every 3 cubic centimeters. Thus, with this value, if the dark matter particle has mass 10 GeV, there would need to be 1 of these particles for each 30 cc of space. This is not a significant amount; within Earth’s orbit it would amount to about 8 billion tons. Out to the orbit of Saturn, the total amount would be around 9 trillion tons. This is not much in Solar System terms.

However, there’s more to the story than just this quick estimate. Let’s look at the observational constraints first; one can look for perturbations in the orbits of the major Solar System bodies to place some constraints on the amount of dark matter. Then we will look at the possibility that the  Solar System’s complement of dark matter is significantly higher than the value inferred from stellar dynamics within the Milky Way, due to gravitational capture of some of the dark matter encountered over billions of years as the Sun (and the rest of the Solar System) orbits the center of our galaxy at over 200 kilometers per second. The idea is that the average in the Solar “suburban” neighborhood is close to the estimate above, but in the “urban” neighborhood closer to the Sun the dark matter is more concentrated, due to being gravitationally swept up by the Sun and larger planets.

Russian researchers Pitjev and Pitjeva have studied hundreds of thousands of observations – over a nearly 50 year period – of the planets, a number of their moons, and spacecraft in the Solar System, looking for orbital perturbations. They find no measurable deviations which could be ascribed to dark matter. They have found that the density is less than 1.1 x 10^-20 grams/cc at the orbit of Saturn, 1.4 x 10^-20 g/cc at Mars, and less than 1.4 x 10^-19 g/cc at Earth. We can convert this to GeV/cc by noting that the proton mass is .938 GeV, which is equivalent to 1.67 x 10^-24 grams. So their upper limit on density at Saturn is then equivalent to 6000 GeV/cc. This is a much looser constraint. In other words, even at several thousand GeV/cc for the dark matter density near to the Sun, no apparent orbital perturbations would be expected for the 8 planets and several moons and spacecraft studied.

Thus one can conclude that even if the dark matter density in the Solar neighborhood were 10 or even 100 times larger than expected from stellar dynamics observations, that its gravitational effects on the precisely measured orbits of the major planets and major moons in the Solar system would be of no consequence.

In fact the authors note that the aggregate dark matter within Saturn’s orbit should be less than 1/6th of 1 billionth of the Sun’s mass, which is 2 x 10^27 metric tons. We’re talking at most 3 x 10^17 metric tons, which is a lot, but not in Solar system terms. The mass of the Moon is 7 x 10^19 metric tons, so this is an amount over 200 times smaller than the Moon’s mass spread out over the volume within Saturn’s orbit.

Another research team, at the University of Arizona, used a different technique five years ago. They modeled how much dark matter would be swept up into and gravitationally captured, by the Solar System over its 4.5 billion year history as it moves around the galactic center. Drs. Xu and Siegel calculate that about 10^17 metric tons of dark matter have been captured, out to the outer reaches of the Solar system. This amount is just 0.14% of the Moon’s mass and 0.0018% the mass of the Earth. This is consistent with the less than 1/3 x 10^18 metric tons within Saturn’s orbit from the orbital study above.

One of the important consequences of the Xu and Siegel results is that direct searches for dark matter need to consider in their models for data analysis not only the flux of the high velocity component as the Earth and Solar System move around the galactic center at over 200 km/sec, but also the lower velocity component. This applies to the more abundant dark matter that is bound within the Solar System and through which the Earth moves at a rate of 30 km/sec. At the Earth’s location their model implies a density 2000 times higher, or 600 GeV/cc, for this low velocity, bound component so despite the lower velocity, it could well dominate in dark matter detection experiments.