Globular clusters are highly compact star clusters containing hundreds of thousands or even millions of old stars. The stars found in a globular cluster can be up to almost 13 billion years old, and thus act as good tracers of the early history of our Milky Way Galaxy, or of other galaxies in which they are found.

Our Galaxy has about 150 or so globular clusters, and our neighbor the Andromeda Galaxy has over 500. Because they are so compact, they are tightly gravitationally bound, and tend to be very spherical, hence the description as globular. They also orbit our Galaxy in the halo and in various directions; they are not confined to the disk where most of the other stars of the Milky Way are found. This suggests a history for globulars (as they are also called) that predates the formation of the Milky Way’s disk and spiral arms. Many globulars may be remnants of dwarf galaxies that have been pulled into the Milky Way during its long lifetime, or have been captured by the Milky Way as it consumed another, smaller galaxy in its vicinity.

The large majority of globular clusters are thought to contain little dark matter. They contain no dust or gas, their matter appears to be all in stars. Astronomers are able to measure the mass of globulars by determining how fast stars are moving around in the core, and by measuring the size of the globulars. Assuming the globulars are gravitationally relaxed, which most appear to be, then the mass within a certain radius is proportional to the radius and the square of the velocities of stars relative to the globular’s center and within that radius. Some assumptions need to be made about the falloff of matter density, and projection effects corrected, but these can be calculated and compared with observations to provide a self-consistent model.

Going through these steps, and also measuring the absolute brightness of the globular (which requires a distance measurement) allows something called a mass-to-light ratio for the globular to be determined. This is stated in terms of solar units, i.e., using the mass in relation to the Sun’s mass and the absolute brightness in relation to the Sun’s luminosity.

Typical mass-to-light ratios for most globulars are of order unity, say 1 or 2 or 3. This indicates little dark matter is present (we know the dark matter content of ordinary stars such as the Sun is low).

Centaurus A is a peculiar galaxy about 10 million light-years or so away, and is the fifth brightest galaxy in the sky by apparent magnitude. It is classified as a giant elliptical, or lenticular, galaxy with peculiar characteristics. It has a very prominent dust lane through the center as seen in the photograph above, and also possesses a large relativistic jet visible at radio and X-ray wavelengths. There is a black hole at the center of Centaurus A with a mass of over 50 million solar masses. Centaurus A may have as many as 2000 globular clusters.

A study of 125 of the brighter globular clusters in the Centaurus A galaxy, by Matthew Taylor and co-authors, was made at the European Southern Observatory’s Very Large Telescope in Chile. The locations of the globulars are indicated in the green, blue and red circles superimposed on Centaurus A’s image. A certain fraction of the globulars with masses above a million solar masses showed the characteristic that the mass-to-light ratio was abnormally high, and becomes higher nearly in proportion to the mass of the globular. This set of globulars is denoted in red circles in the image. The most massive of the red circle globulars have the highest mass-to-light ratios.

The authors find, quoting from their paper, “a distinct group of objects which require significant dark gravitating components such as central massive black holes and/or exotically concentrated dark matter distributions.” These objects have mass-to-light ratios above 6, and half a dozen have mass-to-light ratios over 15, including one object with a very high ratio of 67.

Several explanations are proposed. One is rotation of the globulars in question, but the authors are able to rule this explanation out since the stability of the cluster would be destroyed. Another is massive black holes in the centers of these globulars. This would require black holes with masses in the range 40,000 to over 1 million solar masses, and would be quite an exciting finding in its own right. There is evidence for intermediate mass black holes in a few other globular clusters found in the Milky Way and other galaxies. An additional possibility is the accumulation of many smaller stellar-sized black holes and/or neutron stars in the center of the cluster that would modify the cluster’s dynamical properties.

Yet another possibility is the presence of significant dark matter. If verified there would be important implications for globular cluster formation histories. This study should lead to a rush for other observations to ferret out high mass-to-light ratio globular clusters and to allow astronomers to distinguish between the black hole, dark stellar remnant, and dark matter possible scenarios.

Already there is a Wikipedia entry for “dark globular clusters”.

http://www.eso.org/public/archives/releases/sciencepapers/eso1519/eso1519a.pdf, submitted to the Astrophysical Journal

Blue Tides and the Milky Way

I recently wrote about the  largest high-redshift cosmological simulation of galaxy formation ever, which has been recently completed by a group of astrophysicists in the U.S. and the U.K. This tour-de-force simulation, named BlueTides, was performed on the Blue Waters Cray XE supercomputer at NCSA and employed 648,000 cores. The researchers utilized approximately 700 billion particles (!) to represent dark matter and ordinary matter and to create galaxies inside the supercomputer.

You can find the full article describing the simulation at insidehpc.com.

Galaxies are the fundamental building blocks of the large scale structure of the universe. Very early on, before the first galaxies formed, the universe was a highly uniform mix of dark matter and ordinary matter, but with about 5 times as much dark matter by mass relative to the ordinary matter (protons, neutrons, electrons) that makes up the visible parts of galaxies, including stars, gas and dust. Ares of higher dark matter density play a key role in gravitationally attracting ordinary matter that forms galaxies and stars.

When we think of the word galaxy we typically think of beautiful modern day spiral galaxies, such as the Andromeda Galaxy. Spiral galaxies are flattened, rotating disks; the spiral arms represent concentrations of matter and of star-forming regions. The most distant disk-shaped galaxies that have been detected are at redshifts of 2 to 3, so we are seeing them as they were when the universe was around 2 to 3 billion years old. (The higher the redshift the more distant the galaxy and also the farther back in time we are looking, toward the universe’s origin some 13.8 billion years ago).

The BlueTides simulation provides insight into what was going on when the universe was only around 1/2 a billion years old, with galaxy redshifts around 8 to 10. It does a good job of matching the limited observational data we have at such highredshifts, in particular the rest frame (before redshift) ultraviolet luminosities of the earliest detected galaxies from the Hubble Space Telescope surveys.

Their simulation finds that, among the most massive galaxies in their simulation, “a significant fraction are visually disk-like, and surprisingly regular in shape”. In other words, they appear to be the progenitors of present-day spiral galaxies. They find that, at a redshift of 8, a full 70% of their virtual galaxies with masses above 10 billion solar masses are classifiable as disks, since a majority of stellar orbits lie in the plane of the disk.

They also find that mergers are not of major significance in the build-up of these early massive galaxies. Rather it appears that they grew primarily by cold gas arriving from preferred directions, namely along filaments in the density distribution of the background gas. It is well known that the universe has a web-like or filamentary structure of high density regions interspersed with voids (relatively empty regions). This filamentary structure is believed on the basis of many simulations of the large-scale universe to have begun at an early date.

A future infrared satellite known as WFIRST will have a field of view 200 times larger than the Wide Field Camera on the Hubble. Also, its design for infrared radiation detection makes it appropriate for studying the light from high-redshift galaxies. The authors predict that a survey of 2000 square degrees with WFIRST should find roughly 8000 massive disk-type galaxies at redshifts above 8. Future very large ground-based telescopes will be able to make follow-up observations of galaxies discovered by WFIRST. Such observations will provide further insight into the nature of galaxy formation, including accretion of material from the background and the details of dark matter’s role in the process.

The largest high-redshift cosmological simulation of galaxy formation ever has been recently completed by a group of astrophysicists from the U.S. and the U.K. This tour-de-force simulation was performed on the Blue Waters Cray XE/XK system at NCSA and employed 648,000 CPU cores. They utilized approximately 700 billion particles (!) to represent dark matter and ordinary matter and to create virtual galaxies inside the supercomputer. The authors, who represent Carnegie Mellon University, UC Berkeley, Princeton University, and the University of Sussex, have given their simulation the moniker BlueTides.

The astrophysicists simulated galaxy formation in a “box” 2 billion light-years on a side. At redshifts of  z = 8 to 10,  which is the maximum for which we have observed real galaxies, their simulation matches the data from the Hubble Space Telescope. And yes, dark matter plays a key role – it is the main gravitational sink that pulls in ordinary matter that forms the stars, gas, and dust that are the primary visible components of galaxies. Without dark matter, our Milky Way would be much smaller, and you probably wouldn’t be here. You can learn more about the BlueTides simulation results and methodology at insidehpc.com. 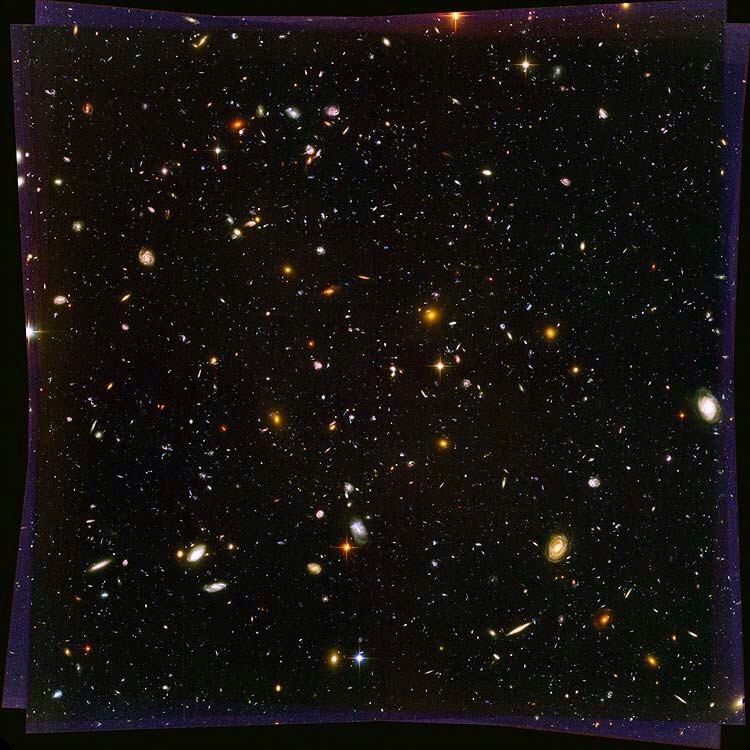