Are Newton and Einstein both wrong?

Maybe Dark Matter has been going by the wrong name all along, ever since the cantankerous Swiss astronomer Fritz Zwicky coined the name, when his observations of the Coma cluster of galaxies showed the velocities were very much higher than expected.

He assumed Newton’s laws, and indeed general relativity, are correct. And that has been the canonical assumption ever since.

“Dark matter” has been studied on the scale of individual galaxies, clusters of galaxies, and the universe as a whole. The measurements of rotation velocity of spiral galaxies decades ago set the tone.

But the effects have been seen in the velocity dispersions of elliptical galaxies, in clusters of galaxies, and indeed in the cosmic microwave background temperature fluctuations.

What effects? Well for galaxies, whether for rotation or for dispersions within elliptical galaxies, what is actually observed is extra acceleration.

In the case of galaxy rotation curves, the outer regions of the galaxies rotate faster than expected, where the expectation is set by the profile of visible matter and the modeling of the relationship between stellar luminosity and masses.

What is actually measured is the rotational (centripetal) observed acceleration of outer regions as being higher than expected, sometimes very much so.

Now general relativity is not the explanation for the discrepancy, because we see departures from Newtonian behavior towards general relativistic formulae when acceleration is quite high, not when it is very low. So if Newton is wrong at very low accelerations, so is Einstein. 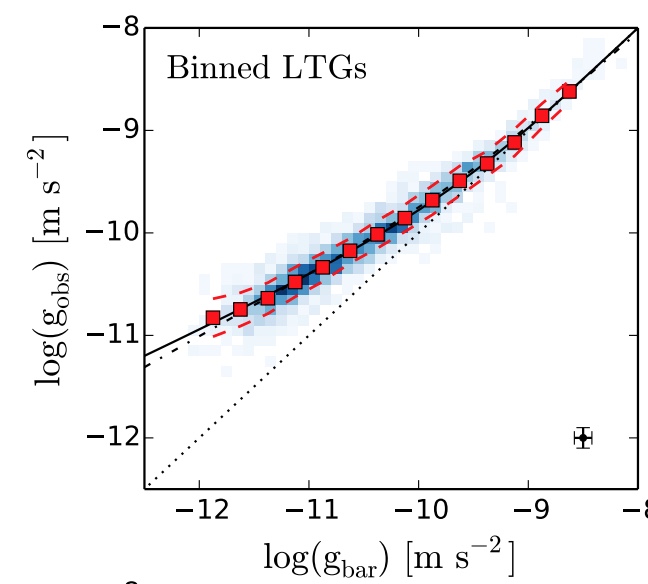 Explanations such as emergent gravity and other modified Newtonian dynamics approaches need serious theoretical and experimental investigation. They have been playing a distant second fiddle to expensive dark matter searches for WIMPs and axions, which keep coming up short even as the experiments become more and more sensitive.

This entry was posted on Thursday, August 2nd, 2018 at 6:41 pm and posted in Uncategorized. You can follow any responses to this entry through the RSS 2.0 feed.
« WIMPZillas: The Biggest WIMPs
Matter and Energy Tell Spacetime How to Be: Dark Gravity »