Dark Energy is the dominant constituent of the universe, accounting for 2/3 of the mass-energy balance at present.

At least that is the canonical concordance cosmology, known as the ΛCDM or Lambda – Cold Dark Matter model. Here Λ is the symbol for the cosmological constant, the simplest, and apparently correct (according to most cosmologists), model for dark energy.

Models of galaxy formation and clustering use N-body simulations run on supercomputers to model the growth of structure (galaxy groups and clusters) in the universe. The cosmological parameters in these models are varied and then the models are compared to observed galaxy catalogs at various redshifts, representing different ages of the universe.

It all works pretty well except that the models assume a fully homogeneous universe on the large scale. While the universe is quite homogeneous for scales above a billion light-years, there is a great deal of filamentary web-like structure at scales above clusters, including superclusters and voids, as you can easily see in this map of our galactic neighborhood.

Well why not take that structure into account when doing the modeling? It has long been known that more local inhomogeneities such as those seen here might influence the observational parameters such as the Hubble expansion rate. Thus even at the same epoch, the Hubble parameter could vary from location to location.

Now a team from Hungary and Hawaii have modeled exactly that, in a paper entitled “Concordance cosmology without dark energy” https://arxiv.org/pdf/1607.08797.pdf . They simulate structure growth while estimating the local values of expansion parameter in many regions as their model evolves.

Starting with a completely matter dominated (Einstein – de Sitter) cosmology they find that they can reasonably reproduce the average expansion history of the universe — the scale factor and the Hubble parameter — and do that somewhat better than the Planck -derived canonical cosmology.

Furthermore, they claim that they can explain the tension between the Type Ia supernovae value of the Hubble parameter (around 73 kilometers per second per Megaparsec) and that determined from the Planck satellite observations of the cosmic microwave background radiation (67 km/s/Mpc).

Future surveys of higher resolution should be able to distinguish between their model and ΛCDM, and they also acknowledge that their model needs more work to fully confirm consistency with the cosmic microwave background observations.

Meanwhile I’m not ready to give up on dark energy and the cosmological constant since supernova observations, cosmic microwave background observations and the large scale galactic distribution (labeled BAO in the figure below) collectively give a consistent result of about 70% dark energy and 30% matter. But their work is important, something that has been a nagging issue for quite a while and one looks forward to further developments.

Looking for Dark Energy in the Lyman Alpha Forest

Baryon acoustic oscillations (BAO) are the acoustic (sound) waves that occur in the very early universe due to very small density inhomogeneities in the nearly uniform fluid. These primordial acoustic oscillations have left an imprint on the way in which galaxies are spatially distributed. The characteristic scale length for these oscillations is around 500 million light years (in the frame of the present-day universe). A spatial correlation function is used to measure the degree to which galaxies and clumps of matter in general, including dark matter, are separated from one another. The characteristic length scale serves as a standard ruler for very large-scale clustering, and is seen as a distinctive break (change in slope) in the power spectrum of the degree of spatial correlation vs. distance.

An international consortium of astronomers representing 29 institutions have submitted a paper last month to the journal Astronomy and Astrophysics; the current version can be found here (http://arxiv.org/abs/1211.2616). They used a clever technique of detecting clouds of neutral hydrogen along the line of sight to a large number of quasars with high redshifts. Thus the matter clumps in this case are neutral hydrogen clouds or neutral hydrogen within intervening galaxies or proto-galaxies. These absorb light from the quasar and produce absorption lines in the spectrum at discrete locations corresponding to various redshifts. The authors are detecting a characteristic transition known as the Lyman alpha line, which is found well into the ultraviolet at 121.6 nanometers (for zero redshift).

For this work over 48,000 high-redshift quasars, with a mean redshift of 2.3, were taken from the 3rd Sloan Digital Sky Survey. A quasar may have many hydrogen clouds intervening along the line of sight from the Earth to the quasar. These clouds will be seen at different redshifts (less than the quasar redshift) reflecting their position along the line of sight. This is referred to as the Lyman alpha “forest”. This study is the first application of Lyman alpha forest measurement to the detection of the BAO feature. At the average red shift of 2.3, the wavelength of Lyman alpha radiation is shifted to 401.3 nm [calculated as (1+2.3)*121.6 nm], in the violet portion of the visible spectrum. The study incorporated redshifts from the absorbing clouds in the range of 1.96 to 3.38; these are found in front of (at lower redshift than) quasars with redshifts ranging from 2.1 to 3.5. 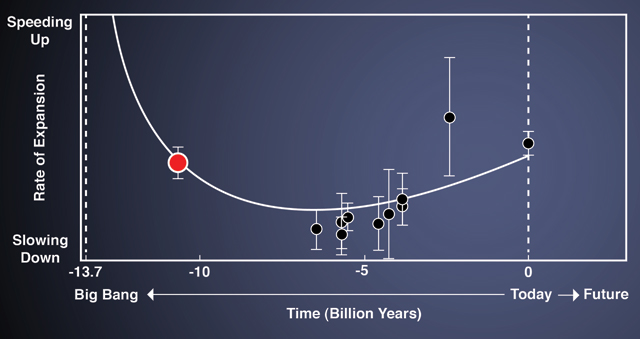 Speedup or slowdown versus age of universe. The Big Bang is on the left, 13.7 billion years ago.

The authors’ measurement of the expansion rate of the universe is shown as the red dot in this figure. The white line through the various data points is the rate of expansion of the universe expected versus time for the standard Lambda-Cold Dark Matter cosmological model. The expansion rate at early times was lessening due to gravity from matter (ordinary and dark), but it is now increasing, since dark energy has come to dominate during the last 5 billion years or so. The red data point is clearly on the slowing down portion of the curve. Image credit: http://sdss3.wordpress.com/2012/11/13/boss-detects-baryon-acoustic-oscillations-in-the-lyman-alpha-forest-at-z-of-2-3/

The BAO feature has been measured a number of times, using galaxy spatial distributions, but always at lower redshifts, that is at more recent times. This is not only the first Lyman alpha-based measurement, but the first measurement made at a high redshift for which the universe was still slowing down, i.e. the expansion was decelerating. At the redshift of 2.3, when the universe was only about 3 billion years old, the gravitational effect of dark plus ordinary matter was stronger than the repulsive effect of dark energy. It is only more recently, after the universe become about 9 billion years old (some 5 billion years ago), and corresponding to redshifts less than about z = 0.8, that dark energy began to dominate and cause an acceleration in the overall expansion of the universe.

Since this observation shows a significantly higher rate of expansion than occurred at the minimum around 5 billion years ago, it is further evidence that dark energy in some form is real. As the authors state in their paper: “Combined with CMB constraints, we deduce the expansion rate at z = 2.3 and demonstrate directly the sequence of deceleration and acceleration expected in dark-energy dominated cosmologies.” This is an exciting result, providing additional confirmation that dark energy represents around three-quarters of the present-day energy balance of the universe.

Last month the Dark Energy Survey project achieved first light from its remote location in Chile’s Atacama Desert. The term first light is used by astronomers to refer to the first observation by a new instrument.

And what an instrument this is! It is in fact the world’s most powerful digital camera. This Dark Energy Camera, or DECam, is a 570 Megapixel optical survey camera with a very wide field of view. The field of view is over 2 degrees, which is rather unusual in optical astronomy. And the camera requires special CCDs that are sensitive in the red and infrared parts of the spectrum. This is because distant galaxies have their light shifted toward the red and the infrared by the cosmological expansion. If the galaxy redshift is one,  the light travels for about 8 billion years and the wavelength of light that the DECam detects is doubled, relative to what it was when it was originally emitted. 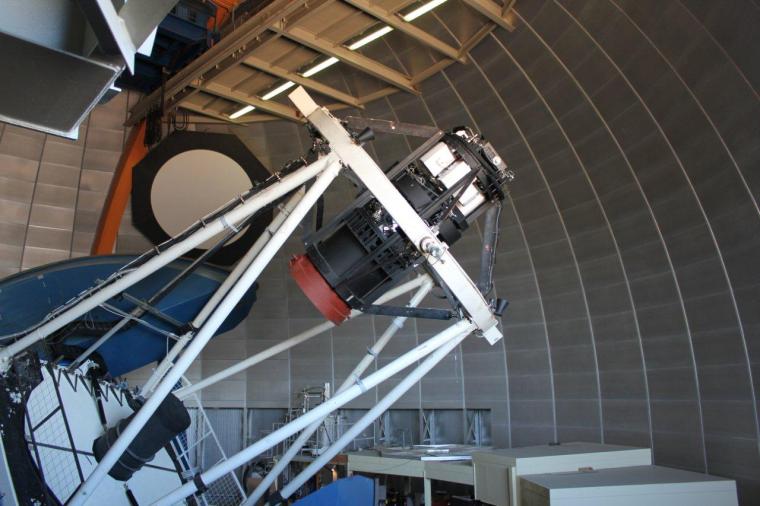 Image: DECam, near center of image, is deployed at the focus of the 4-meter Victor M. Blanco optical telescope in Chile (Credit: Dark Energy Survey Collaboration)

The DECam has been deployed to further our understanding of dark energy through not just one experimental method, but in fact four different methods. That’s how you solve tough problems – by attacking them on multiple fronts.

It’s taken 8 years to get to this point, and there have been some delays, as normal for large projects. But now this new instrument is mounted at the focal plane of the existing 4-meter telescope of the National Science Foundation’s Cerro Tololo Inter-American observatory in Chile. It will begin its program of planned measurements of several hundred million galaxies starting in December after several weeks of testing and calibration. Each image from the camera-telescope combination can capture up to 100,000 galaxies out to distances of up to 8 billion light years. This is over halfway back to the origin of the universe almost 14 billion years ago.

In a previous blog entry I talked about the DES and the 4 methods in some detail. In brief they are based on observations of: 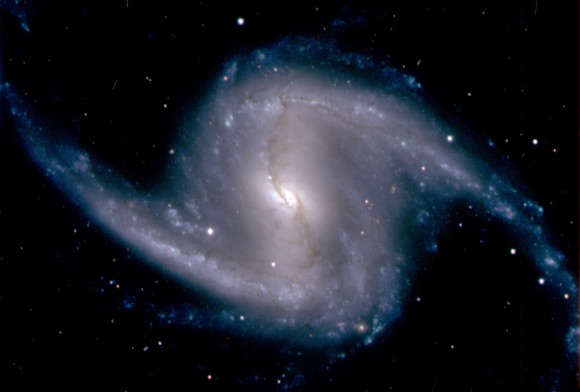 What does the Dark Energy Survey team, which has over 120 members from over 20 countries, hope to learn about dark energy? We already have a good handle on its magnitude, at around 73% presently of the universe’s total mass-energy density.

The big issue is does it behave as a cosmological constant or as something more complex? In other words, how does the dark energy vary over time and is there possibly some spatial variation as well? And what is its equation of state, or relationship between its pressure and density?

With a cosmological constant explanation the relationship is Pressure = – Energy_density, a negative pressure, which is necessary in any model of the dark energy, in order for it to drive the accelerated expansion seen for the universe. Current observations from other experiments, especially those measuring the cosmic microwave background, support an equation of state parameter within around 5% of the value -1, as represented in the equation in the previous sentence. This is consistent with the interpretation as a pressure resulting from the vacuum. Dark energy appears also to have a constant or nearly constant density per unit volume of space. It is unlike ordinary matter and dark matter, that both drop in mass density (and thus energy density) as the volume of the universe grows. Thus dark energy becomes ever more dominant over dark matter and ordinary matter as the universe continues to expand.

We can’t wait to see the first publication of results from research into the nature of dark energy using the DECam.