Tag Archives: evolution of the universe

Moreover, the dark matter content of clusters is even greater than the gas content; typically it amounts to 80% to 90% of the cluster mass. In fact, the first detection of dark matter’s gravitational effects was made by Fritz Zwicky in the 1930s. His measurements indicated that the galaxies were moving around much faster than expected from the known galaxy masses within the cluster. 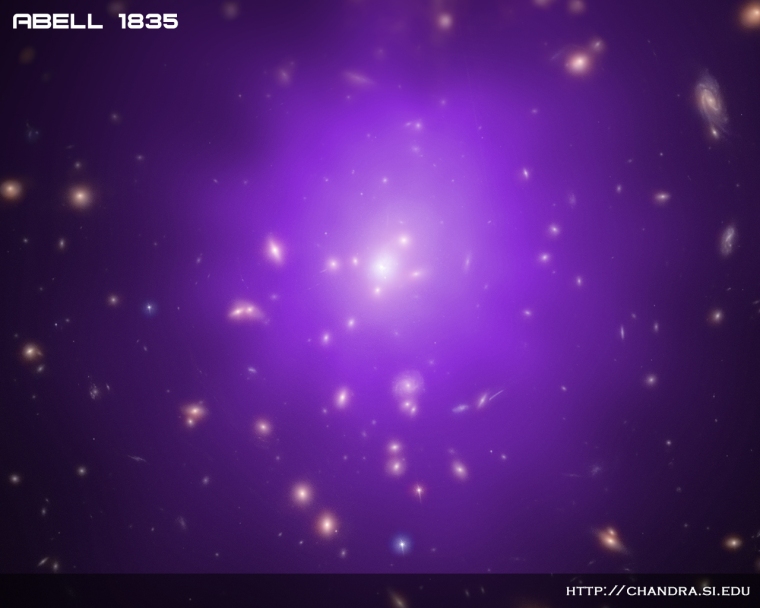 The dark matter’s gravitational field controls the evolution of a cluster. As a cluster forms via gravitational collapse, ordinary matter falling into the strong gravitational field interacts via frictional processes and shocks and thermalizes at a high temperature in the range of 10 to 100 million degrees (Kelvins). The gas is so hot, that it emits X-rays due to thermal bremsstrahlung.

Recently, Drs. Morandi and Sun at the University of Alabama have implemented a new test of dark energy using the observed X-ray emission profiles of clusters of galaxies. Since clusters are dominated by the infall of primordial gas (ordinary matter) into dark matter dominated gravitational wells, then X-ray emission profiles – especially in the outer regions of clusters – are expected to be similar, after correcting for temperature variations and the redshift distance. Their analysis also considers variation in gas fraction with redshift; this is found to be minimal.

Because of the self similar nature of the X-ray emission profiles, X-ray clusters of galaxies can serve as cosmological probes, a type of ‘standard candle’. In particular, they can be used to probe dark energy, and to look at the possibility of the variation of the strength of dark energy over multi-billion year cosmological time scales.

The reason this works is that cluster development and mass growth, and corresponding temperature increase due to stronger gravitational potential wells, are essentially a tradeoff of dark matter and dark energy. While dark matter causes a cluster to grow, dark energy inhibits further growth.

This varies with the redshift of a cluster, since dark energy is constant per unit volume as the universe expands, but dark matter was denser in the past in proportion to (1 + z)^3, where z is the cluster redshift. In the early universe, dark matter thus dominated, as it had a much higher density, but in the last several billion years, dark energy has come to dominate and impede further growth of clusters.

The table below shows the percentage of the mass-energy of the universe which is in the form of dark energy and in the form of matter (both dark and ordinary) at a given redshift, assuming constant dark energy per unit volume. This is based on the best estimate from Planck of 68% of the total mass-energy density due to dark energy at present (z = 0). Higher redshift means looking farther back in time. At z = 0.5, around 5 billion years ago, matter still dominated over dark energy, but by around z = 0.3 the two are about equal and since then (for smaller z) dark energy has dominated. It is only since after the Sun and Earth formed that the universe has entered the current dark energy dominated era.

The authors analyzed data from a large sample consisting of 320 clusters of galaxies observed with the Chandra X-ray Observatory. The clusters ranged in redshifts from 0.056 up to 1.24 (almost 9 billion years ago), and all of the selected clusters had temperatures measured to be equal to or greater than 3 keV (above 35 million Kelvins). For such hot clusters, non-gravitational astrophysical effects, are expected to be small.

Their analysis evaluated the equation of state parameter, w, of dark energy. If dark energy adheres to the simplest model, that of the cosmological constant (Λ) found in the equations of general relativity, then w = -1 is expected.

The equation of state governs the relationship between pressure and energy density; dark energy is observed to have a negative pressure, for which w < 0, unlike for matter.

Their resulting value for the equation of state parameter is

equal to -1 within the statistical errors.

The results from combining three other experiments, namely

also consistent with a cosmological constant. And combining both the X-ray cluster results with the CMB and optical results yields a tight constraint of

Thus a simple cosmological constant explanation for dark energy appears to be a sufficient explanation to within a few percent accuracy.

The authors were also able to constrain the evolution in w and find, for a model with

This is a powerful test of dark energy’s existence, equation of state, and evolution, using hundreds of X-ray clusters of galaxies. There is no evidence for evolution in dark energy with redshift back to around z = 1, and a simple cosmological constant model is supported by the data from this technique as well as from other methods.