The LUX (Large Underground Xenon) experiment has just announced results from their first run, which gathered data for 85 days between April and August of this year. LUX is located a mile underground (to shield from cosmic rays and other interference) in an old mine in South Dakota, and employs a liquid Xenon detector with total mass of 370 kg. LUX is searching for WIMP dark matter particles which recoil directly off the nucleus of Xenon atoms in the detector. 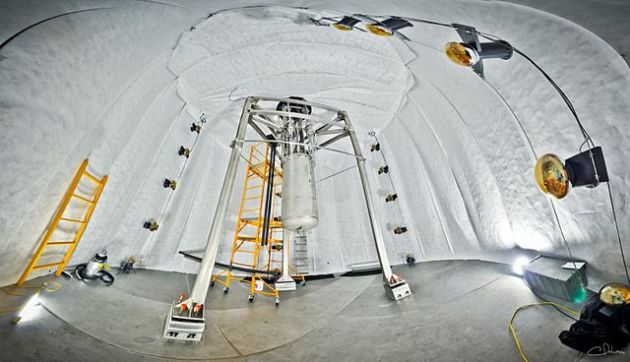 They have two important findings from this first swath of data. First, to within the sensitivity of their experiment, they detected no weakly interacting massive dark particles (WIMPs). And second, their experiment has much greater sensitivity than other experiments in the low mass range from about 5 GeV to 100 GeV (the proton rest mass is a bit less than 1 GeV). Thus it is placing much tighter constrains on the cross-section for dark matter to interact with a nucleus, and the density of dark matter at the Earth’s orbit. The previous largest Xenon-based experiment was XENON100 (for 100 kg total detector mass). With LUX, the sensitivity has improved over the results of that earlier experiment by around a factor of 20 for a possible 10 GeV WIMP mass, due to the larger target and better rejection of background events.

This chart is the most interesting portion of Fig. 5 from the LUX first results paper (reference below). The blue line shows the upper limit on the cross section dropping from 10^-40 cm² to less than 10-44 cm² as a function of WIMP mass, as the mass increases from about 5 to 12 GeV (X-axis above the chart). Note the Y-axis is logarithmic, so the new limit is orders of magnitude below other limits (various colored curves) and claimed possible detections (shaded areas).

These new LUX results are in direct conflict with possible detections from CoGeNT (small red-shaded area on chart), CRESST (yellow-shaded), CDMS- II (green-shaded area), and DAMA/LIBRA (grey-shaded area), all of which were suggesting detections with a WIMP dark matter mass around 10 GeV. Now certain assumptions are made about the astrophysical parameters such as the density of dark matter at the Earth being the same as the average in our part of the galaxy. But other experimental results are based on similar assumptions, so this does not explain the discrepancy.

Both CoGeNT and CDMS-II sit in the same Soudan Laboratory in Minnesota, one state over from where the LUX experiment resides. However different experiments use different atoms as targets: CoGeNT uses germanium, CDMS uses silicon, CRESST uses calcium tungstate crystals and DAMA/LIBRA uses thallium doped sodium iodide. These latter two experiments are both located in Italy, in a mountain tunnel. All of these experiments are attempting to discern a very faint signal against significant backgrounds. And perhaps earn a Nobel Prize in Physics as well. So it’s natural for the researchers on the associated teams to lean toward optimism It remains quite possible, and now seems more and more probable, that the experiments other than LUX are observing some unexplained non-dark matter background effect, so this is a very significant result.

LUX is not finished, of course. It’s just getting going. So we await their further results, with either a possible WIMP detection in the future, or even tighter limits on the existence of lower mass WIMPs.

http://profmattstrassler.com/2013/10/30/breaking-news-two-great-new-measurements/ – on the LUX results

Astrophysicist. Cryptocurrency and technology analyst. Macro investor. END_OF_DOCUMENT_TOKEN_TO_BE_REPLACED
This entry was posted on Friday, November 8th, 2013 at 1:19 am and tagged with CDMS, Cogent, CRESST, DAMA/LIBRA, Dark matter, LUX, WIMPs and posted in Dark Matter. You can follow any responses to this entry through the RSS 2.0 feed.
« Higgs Boson and Dark Matter, Part 1
2013 in review »