One of the main ways in which dark matter was postulated, primarily in the 1970s, by Vera Rubin (recently deceased) and others, was by looking at the rotation curves for spiral galaxies in their outer regions. Although that was not the first apparent dark matter discovery, which was by Fritz Zwicky from observations of galaxy motion in the Coma cluster of galaxies during the 1930s.

Most investigations of spiral galaxies and star-forming galaxies have been relatively nearby, at low redshift, because of the difficulty in measuring these accurately at high redshift. For what is now a very large sample of hundreds of nearby galaxies, there is a consistent pattern. Galaxy rotation curves flatten out. 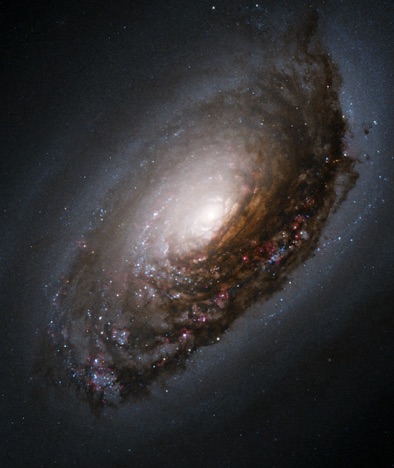 If there were only ordinary matter one would expect the velocities to drop off as one observes the curve far from a galaxy’s center. This is virtually never seen at low redshifts, the rotation curves consistently flatten out. There are only two possible explanations: dark matter, or modification to the law of gravity at very low accelerations (dark gravity).

Dark matter, unseen matter, would case rotational velocities to be higher than otherwise expected. Dark, or modified gravity, additional gravity beyond Newtonian (or general relativity) would do the same.

Now a team of astronomers (Genzel et al. 2017) have measured the rotation curves of six individual galaxies at moderately high redshifts ranging from about 0.9 to 2.4.

Furthermore, as presented in a companion paper, they have stacked a sample of 97 galaxies with redshifts from 0.6 to 2.6  to derive an average high-redshift rotation curve (P. Lang et al. 2017). While individually they cannot produce sufficiently high quality rotation curves, they are able to produce a mean normalized curve for the sample as a whole with sufficiently good statistics.

In both cases the results show rotation curves that fall off with increasing distance from the galaxy center, and in a manner consistent with little or no dark matter contribution (Keplerian or Newtonian style behavior).

In the paper with rotation curves of 6 galaxies they go on to explain their falling rotation curves as due to “first, a large fraction of the massive high-redshift galaxy population was strongly baryon-dominated, with dark matter playing a smaller part than in the local Universe; and second, the large velocity dispersion in high-redshift disks introduces a substantial pressure term that leads to a decrease in rotation velocity with increasing radius.”

So in essence they are saying that the central regions of galaxies were relatively more dominated in the past by baryons (ordinary matter), and that since they are measuring Hydrogen alpha emission from gas clouds in this study that they must also take into account the turbulent gas cloud behavior, and this is generally seen to be larger at higher redshifts.

Stacy McGaugh, a Modified Newtonian Dynamics (MOND) proponent, criticizes their work saying that their rotation curves just don’t go far enough out from the galaxy centers to be meaningful. But his criticism of their submission of their first paper to Nature (sometimes considered ‘lightweight’ for astronomy research results) is unfounded since the second paper with the sample of 97 galaxies has been sent to the Astrophysical Journal and is highly detailed in its observational analysis.

The father of MOND, Mordehai Milgrom, takes a more pragmatic view in his commentary. Milgrom calculates that the observed accelerations at the edge of these galaxies are several times higher than the value at which rotation curves should flatten. In addition to this criticism he notes that half of the galaxies have low inclinations, which make the observations less certain, and that the velocity dispersion of gas in galaxies that provides pressure support and allows for lower rotational velocities, is difficult to correct for.

As in MOND, in Erik Verlinde’s emergent gravity there is an extra acceleration (only apparent when the ordinary Newtonian acceleration is very low) of order. This spoofs the behavior of dark matter, but there is no dark matter. The extra ‘dark gravity’ is given by:

In this equation a0 = c*H, where H is the Hubble parameter and gB is the usual Newtonian acceleration from the ordinary matter (baryons). Fundamentally, though, Verlinde derives this as the interaction between dark energy, which is an elastic, unequilibrated medium, and baryonic matter.

One could consider that this dark gravity effect might be weaker at high redshifts. One possibility is that density of dark energy evolves with time, although at present no such evolution is observed.

Verlinde assumes a dark energy dominated de Sitter model universe for which the cosmological constant is much larger than the matter contribution and approaches unity, Λ = 1 in units of the critical density. Our universe does not yet fully meet that criteria, but has Λ about 0.68, so it is a reasonable approximation.

At redshifts around z = 1 and 2 this approximation would be much less appropriate. We do not yet have a Verlindean cosmology, so it is not clear how to compute the expected dark gravity in such a case, but it may be less than today, or greater than today. Verlinde’s extra acceleration goes as the square root of the Hubble parameter. That was greater in the past and would imply more dark gravity. But  in reality the effect is due to dark energy, so it may go with the one-fourth power  of an unvarying cosmological constant and not change with time (there is a relationship that goes as H² ∝ Λ in the de Sitter model) or change very slowly.

At very large redshifts matter would completely dominate over the dark energy and the dark gravity effect might be of no consequence, unlike today. As usual we await more observations, both at higher redshifts, and further out from the galaxy centers at moderate redshifts.