The Equation of State for Dark Energy

The canonical cosmological model, known as ΛCDM, has all matter including CDM (cold dark matter), at approximately 30% of critical density. And it has dark energy, denoted by Λ, at 70%. While the cosmological constant form of dark energy, first included in the equations of general relativity by Einstein himself, has a positive energy, its pressure is negative.

The negative pressure associated with dark energy, not the positive dark energy density itself, is what causes the universe’s expansion to accelerate.

The form of dark energy introduced by Einstein does not vary as the universe expands, and the pressure, although of opposite sign, is directly proportional to the dark energy density. The two are related by the formula

where P is the pressure and ρ the energy density, while c is the speed of light.

More generally one can relate the pressure to the energy density as an equation of state with the parameter w:

And in the cosmological constant form, w = -1 and is unvarying over the billions of years of cosmological time.

The present day dark energy may be the same field that was originally much much stronger and drove a very brief period of inflation, before decaying to the current low value of about 6 GeV (proton rest masses) per cubic meter.

There are searches for variation in the equation of state parameter w; they are currently inconclusive.

How much variance could there be?

In string theory, the dark energy potential gradient with respect to the field strength yields a parameter c of order unity. For differing values of c, the equation of state parameter w varies with the age of the universe, more so as c is larger.

When we talk about cosmological timescales, it is convenient to speak in terms of the cosmological redshift, where z = 0 is the present and z > 0 is looking back with a larger z indicating a larger lookback time. If the parameter c were zero then the value of w would be -1 at all redshifts (z = 0 is the current epoch and z = 1 is when the universe only about 6 billion years old, almost 8 billion years ago). 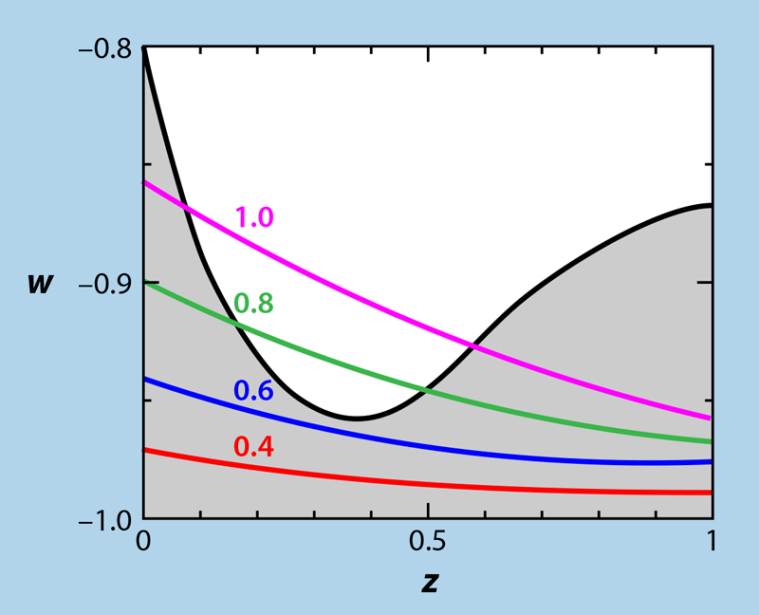 This Figure 3 from an article referenced below by Cumrun Vafa of Harvard shows the expected variance with redshift z for the equation of state parameter w. The observationally allowed region is shaded gray. The colored lines represent different values of the parameter c from string theory (not the speed of light). APS/Alan Stonebraker

Observational evidence constraining w is gathered from the cosmic microwave background, from supernovae of Type Ia, and from the large scale galaxy distribution. That evidence from all three methods in combination restricts one to the lower part of the diagram, shaded gray, thus w could be -1 or somewhat less. There are four colored curves, labelled by their value of the string theory parameter c, and it appears that c > 0.65 could be ruled out by observations.

It’s not the constant tension of the Hubble constant. Rather it is the tension, or disagreement between the cosmic microwave background observational value of the Hubble constant, at around 67 kilometers/sec/Megaparsec and the value from supernovae observations, which yield 73 kilometers/sec. And the respective error bars on each measurement are small enough that the difference may be real.

The cosmic microwave background observations imply a universe about a billion years older, and also better fit with the ages of the oldest stars.

It turns out a varying dark energy with redshift as described above could help to explain much of the discrepancy although perhaps not all of it.

Better observations of the early universe’s imprint on the large scale distribution of galaxies from ground-based optical telescope surveys and from the Euclid satellite’s high redshift gravitational lensing and spectroscopic redshift measurements in the next decade will help determine whether dark energy is constant or not. This could help to disprove string theory or enhance the likelihood that string theory has explanatory power in physics.

Tests of string theory have been very elusive since we cannot reach the extremely high energies required with our Earth-based particle accelerators. Cosmological tests may be our best hope, small effects from string theory might be detectable as they build up over large distances.

And this could help us to understand if the “swampland conjecture” of string theory is likely, predicting an end to the universe within the next few trillion years as the dark energy field tunnels to an even lower energy state or all matter converts into a “tower of light states” meaning much less massive particles than the protons and neutrons of which we are composed.

Astrophysicist. Cryptocurrency and technology analyst. Macro investor. END_OF_DOCUMENT_TOKEN_TO_BE_REPLACED
This entry was posted on Monday, November 11th, 2019 at 11:57 am and tagged with Dark energy, Dark matter, hubble constant, inflation, string theory and posted in Dark Energy. You can follow any responses to this entry through the RSS 2.0 feed.
« Modified Gravity
Hexaquark Dark Matter: Bosons, but not WIMPy at all »

One response to “Dark Catastrophe, a few Trillion Years away?”