Another possibility which is being re-examined as an explanation for dark matter is that of black holes that formed in the very early universe, which in principle could be of very small mass, or quite large mass. And they may have initially formed at smaller masses and then aggregated gravitationally to form larger black holes.

Most of the black holes that we detect (indirectly, from their accretion disks) are stellar-sized in the range of 10 to 100 solar masses and are believed to be the evolutionary endpoints of massive stars. We detect them when they are surrounded by accretion disks of hot luminous matter outside of their event horizons. The other main category of black holes exceeds a million solar masses and can even be more than a billion solar masses, and are known as supermassive black holes.

It is possible that some of the stellar-sized and even elusive intermediate black holes were formed in the Big Bang. Such black holes are referred to as primordial black holes. There are a variety of theoretical formation mechanisms, such as cosmic strings whose loops in all dimensions are contained within the event horizon radius (Schwarzschild radius). In general such primordial black holes (PBHs) would be distributed in a galaxy’s halo, would interact rarely and not have accretion disks and thus would not be detectable due to electromagnetic radiation. That is, they would behave as dark matter.

Dr. Simon Bird and coauthors have recently proposed that the gravitational wave event (GW150914) could be due to two primordial black holes encountering each other in a galactic halo, radiate enough of their kinetic energy away in gravity waves to become bound to each other and inspiral to a single black hole with a final burst of gravitational radiation. The frequency of events is estimated to be of order a few per year per cubic Gigaparsec (a Gigaparsec is 3.26 billion light years), if the dark matter abundance is dominated by PBHs.

While low-mass PBHs have been ruled out for the most part, except of a window around one one-hundred millionth of a solar mass, the authors suggest a window also remains for PBHs in the range from 20 to 100 solar masses.

Dr. A. Kashlinsky has gone further to suggest that the cosmic infrared background (CIB) of unresolved 2 to 5 micron near-infrared sources is due to PBHs. In this case the PBHs would be the dominant dark matter component in galactic halos and would mediate early star and galaxy formation. Furthermore there is an unresolved soft cosmic X-ray background which appears to be correlated with the CIB.

This would be a trifecta, with PBHs explaining much or most of the dark matter, the CIB and the soft-X-Ray CXB! But at this point it’s all rather speculative.

The LIGO instruments are now upgraded to Advanced LIGO and as more gravitational wave events are detected due to black holes, we can gain further insight into this possible explanation for dark matter, in whole or in part. Improved satellite born experiments to further resolve the CIB and CXB will also help to explore this possibility of PBHs as a major component to dark matter. 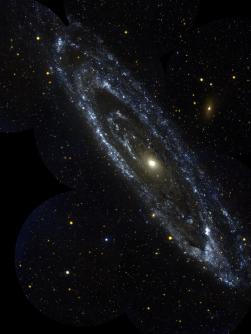 What does the discovery of gravitational waves imply about dark matter and dark energy?

While the existence of gravitational waves was fully expected to be confirmed, the discovery took several decades and represents a technological tour de force. Detected at the two LIGO sites, one in Louisiana and one in Washington State, the main event lasted only 0.2 seconds, and was seen as a change of length in the “arms” of the detector (laser interferometers) of only one part in a thousand billion billion. 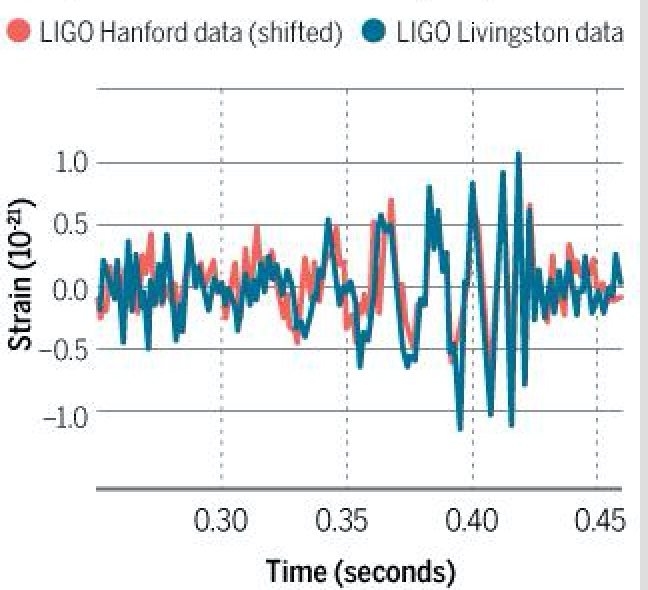 The LIGO detection of gravitational waves. The blue curve is from the Louisiana site and the red curve from the Washington state site. The two curves are shifted by 7 milliseconds to account for the speed-of-light delay between the two sites. Note that most of the power in the signal occurs within less than 0.2 seconds. The strain is a measure of proportional change in length of the detector arm and is less than 1 part in 10²¹.

Nevertheless, this is the most energetic event ever seen by mankind. The merger of two large black holes totaling over 60 times the Sun’s mass resulted in the conversion of 3 solar masses of material into gravitational wave energy. Imagine, there were 3 Suns worth of matter obliterated in the blink of an eye. During this brief period, the generated power was greater than that from the light of all of the stars of all of the galaxies in our known universe.

What the discovery of gravitational waves has to say about dark matter and dark energy is essentially that it further confirms their existence.

Although there is as of now no direct detection of dark matter, we infer the existence of dark matter by using the equations of general relativity (GR), in a number of cases, including:

Dark matter is also inferred from the way in which galaxies rotate and from the velocities of galaxies within galaxy clusters, but general relativity is not needed to calculate the dark matter densities in such cases. However, results from these methods are consistent with results from the methods listed above.

In the case of dark energy, it turns out to be a parameter in the equations of general relativity as first formulated by Einstein. The parameter, lambda, (Λ) is known as the cosmological constant, and represents the minimum energy of the vacuum. For many years astronomers and cosmologists thought it might take the value of zero. However in 1998 multiple teams confirmed that the value is positive and not zero, and it turns out that dark energy has more than twice the energy content of dark matter. Its non-zero value is actually another stunning success for general relativity.

Thus the detection of gravitational waves indirectly provides further support for the canonical cosmological model ΛCDM, with both dark matter and dark energy, and fully consistent with general relativity.